Despite this, at the beginning of April this year, me and my wife flew to Paris for a long weekend, with our usual excuse… a concert. That’s how we escape our “usual” life and hat’s how we get to visit foreign cities. However, this is not what this is about.

Speaking about photography, France, and Paris more specifically, is the reign of one of the greatest, if not the greatest photographer that history remembers.

Henry Cartier Bresson based his life and his work in Paris, showing the world that photography could also be seen as a way to tell stories, real stories, without the need for the photographer to manipulate the scene, to decide what to tell.

For a photographer like me, almost 100% dedicated to street photography in the past years (Ia am now exploring landscape more in depth), shooting in Paris can be intimidating. I’m not even thinking about comparing my work with Bresson’s, it would be foolish and pretentious at the same time, but still… You cannot ignore the fact you’re shooting at HCB’s home.

To make it more complicated, only two full days and an evening are too short of a time to really get a grip of the city, get a little more intimate with it… at least for me. I am usually very bad at shooting a city in my first days there. That’s why I got the best shots of London during my second visit to the City. I’m a slow starter.

To my surprise, however, I was able to capture some shots I’m really proud of. Luck plays a big role in this, especially when your time is so short. But, I think, it’s not just luck, it can’t be just that. There’s some kind of magic that explodes in Paris, there are street photography potential shot at every corner. Cityscapes that are there, waiting for a camera to shoot them. There’s tourists everywhere but, maybe because it was not full summer, it’s not overcrowded, therefore there’s room to take your time, frame the shot, wait for the right moment to happen.

I was only able to capture few of these moments, i saw many of them passing by, but i was not ready to catch them, or the final result did not come out as I expected.

I tend to shoot street photography in Black and White, not because I have to, or because it’s a rule… It’s just that, most of the time, colours tend to distract from the real subject, because they add an additional layer of complexity to the scene. I shoot colour only when colours add something to the scene. The picture below is a clear example of this.

The lady’s jacket matches the tree’s flowers. A black and white version of this would lose a lot of power as this match would disappear in a grey tone. I love this picture. This is luck, of course, with some perseverance.
My wife noticed this lady, and the jacket itself would be a good reason to shoot her. But she was sitting with some other ladies that, in this case, would totally ruin the shot. All of a sudden all the ladies but her decided to free the bench, and went to shoot a picture of the “lady in pink”. This was clearly the moment to shoot this picture. She posed for the shoot, unaware of my presence, and I could take the picture unnoticed, with a perfect point of view and distance from the subject.

A few meters away from this scene, the Trocadéro was waiting for us to stop, and admire the Tour Eiffel in its majesty.

Colours would not fit the scene. The sun was too bright and, as explained before, colours of people’s clothes, together with green and blue from the grass and the sky would make the picture a tourist’s snapshot, not a shot I would be proud of. Trust me, nothing against touristy shots, I take a lot of them, and these shots are what make camera and lenses sell, and get better over time. I did not want to take that kind of shot, that’s it.
Going Black and White was the right choice to bring back people around me to a different level, something that completes the scene, but does not scream “Heeeey look at me, I’m here”. The Tour Eiffel was supposed to be the subject of the scene, as its iconic shape, framed in the center, would get all the attention.
As you can see, however, something happened… A pigeon decided to suddenly take off and enter my frame. I was quick enough to realize that I had to release the shutter immediately to get the bird in the frame. That bird , in that position, it’s the icing on top of the cake. That bird changed that picture from decent, to something I’m really really proud of.
This is, in my opinion, the best picture I took in Paris. If I had to imagine a picture that I wanted to take in Paris, something like this would be probably on top of the list.

I was 100% in the mood for street photography as, only few minutes after this shot I noticed children playing in a playground, surrounded by trees, but with a clear view of the Tour Eiffel… again. I know, it may sound repetitive but… Isn’t it the hallmark of Paris? You can see the tower from almost everywhere. That shot had to be taken.
I had to be patient as any distractions were surrounding the scene. Other children, parents, they were all over the place. All of a sudden, the scene came together. Almost all the adults disappeared, and all the children grouped around the carousel. It wasn’t perfect yet, I had to wait for them to begin the rotation, and finally I took 3 or 4 shots. The best one is shown below.

The detail that drove my choice is how the girl with long hair is positioned. That position, with her hair suspended in what would otherwise be a dead portion of the scene, make for a shot that, again I’m really proud of. 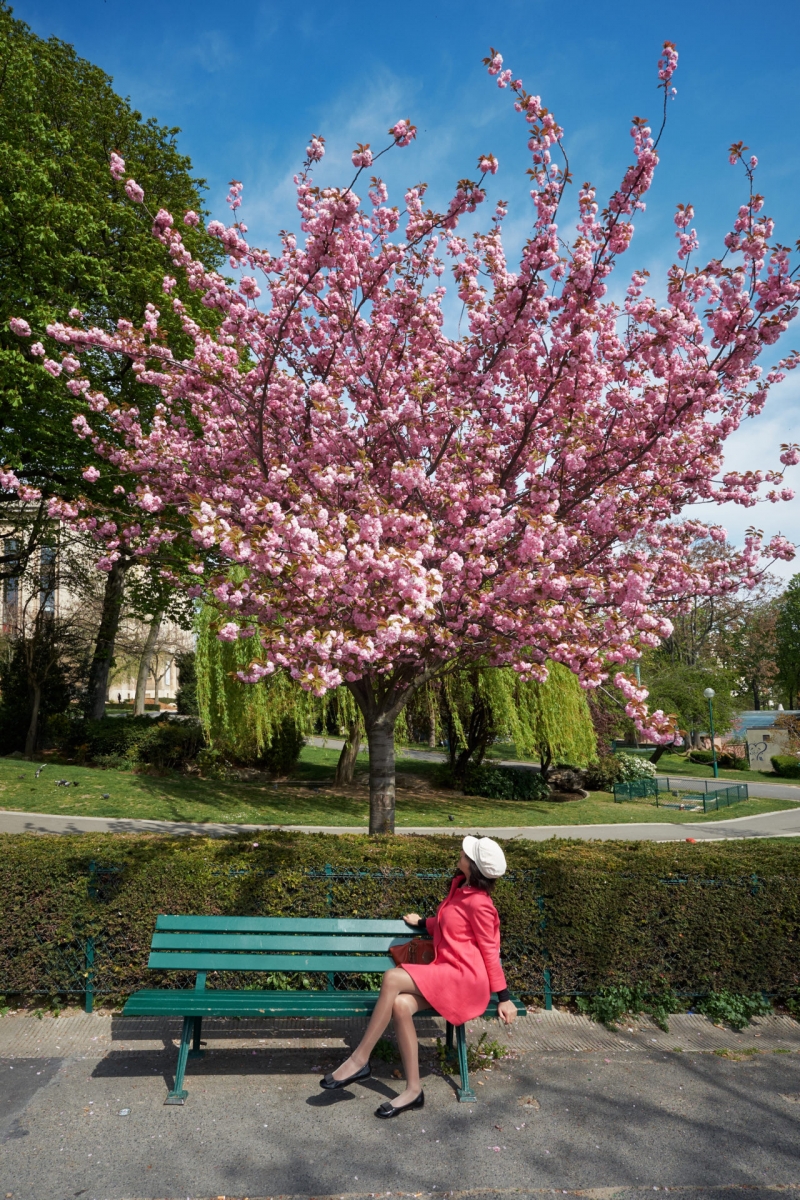 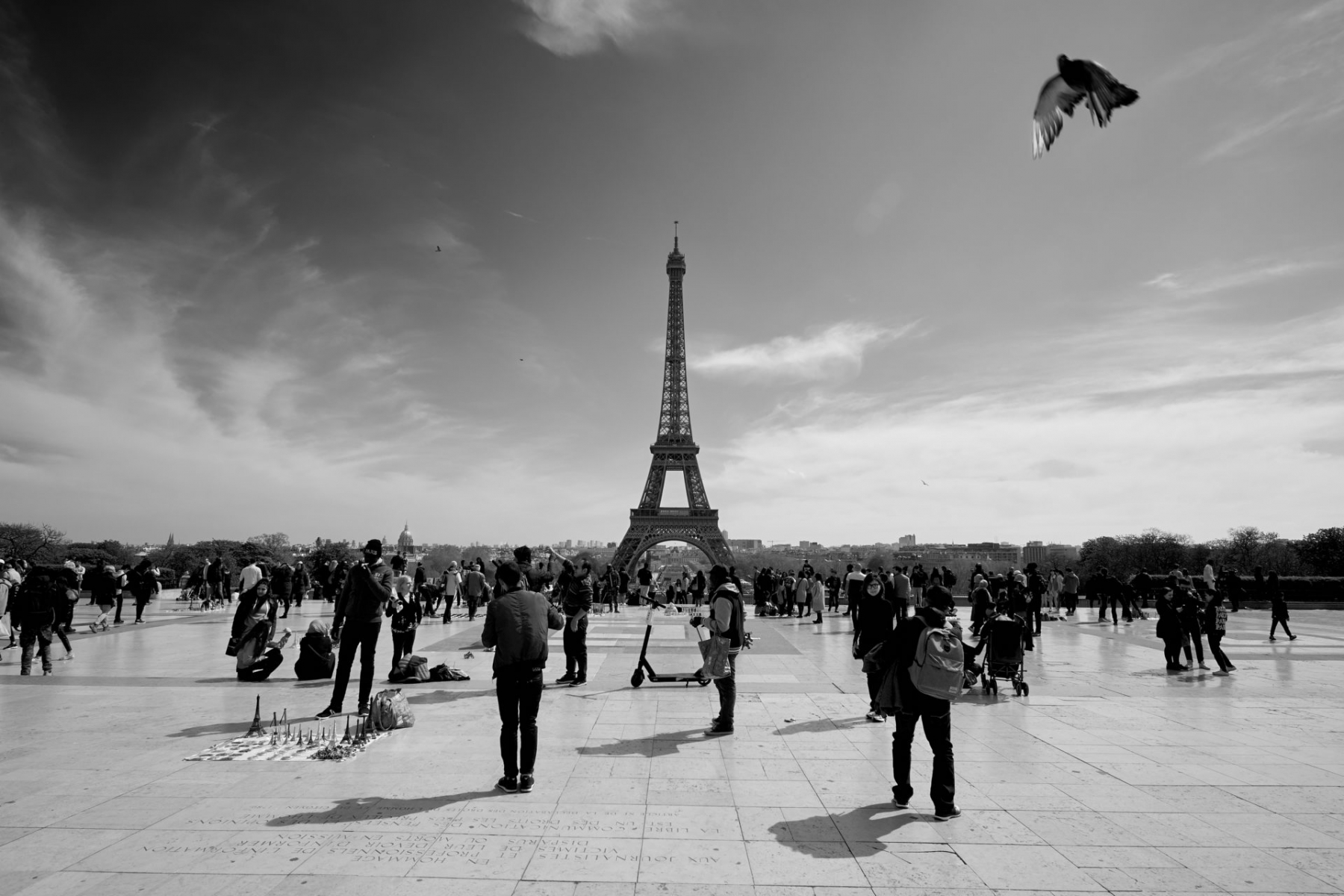 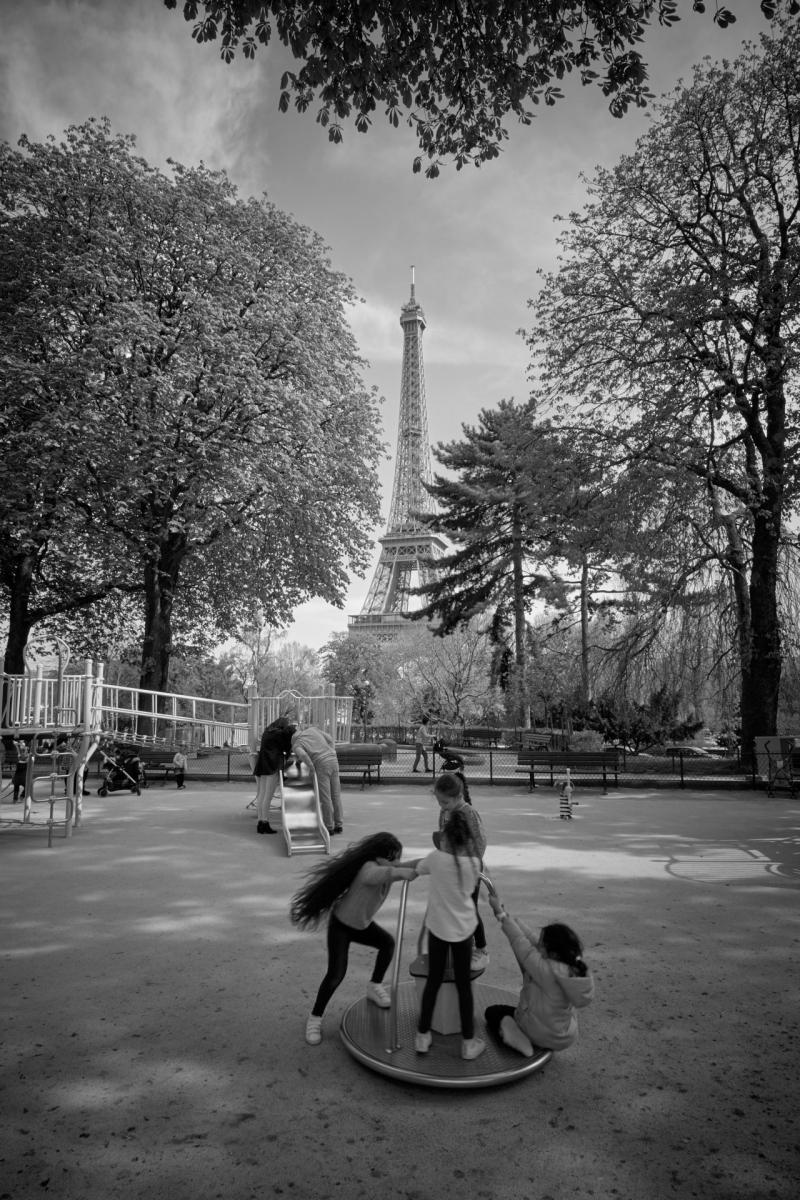 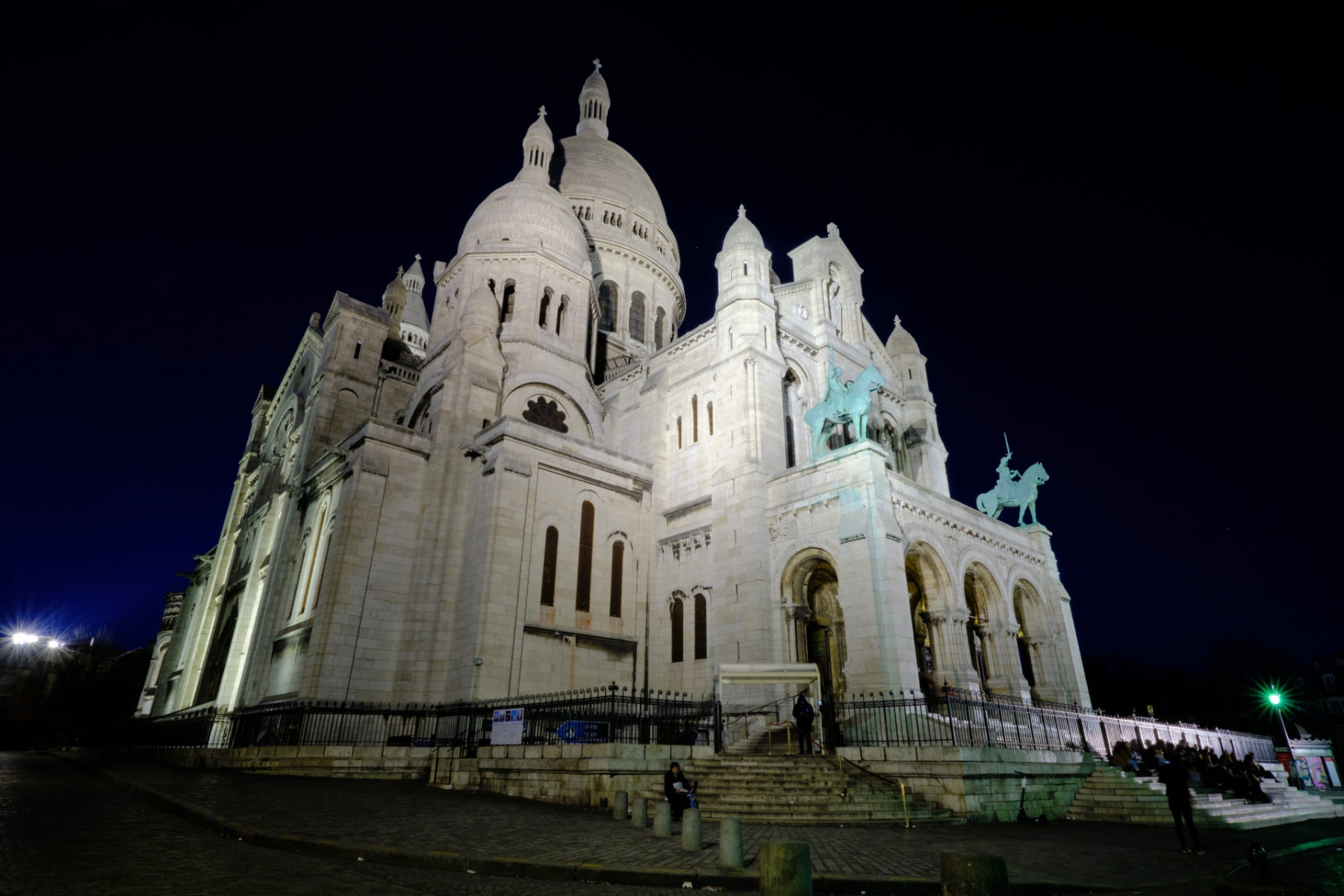 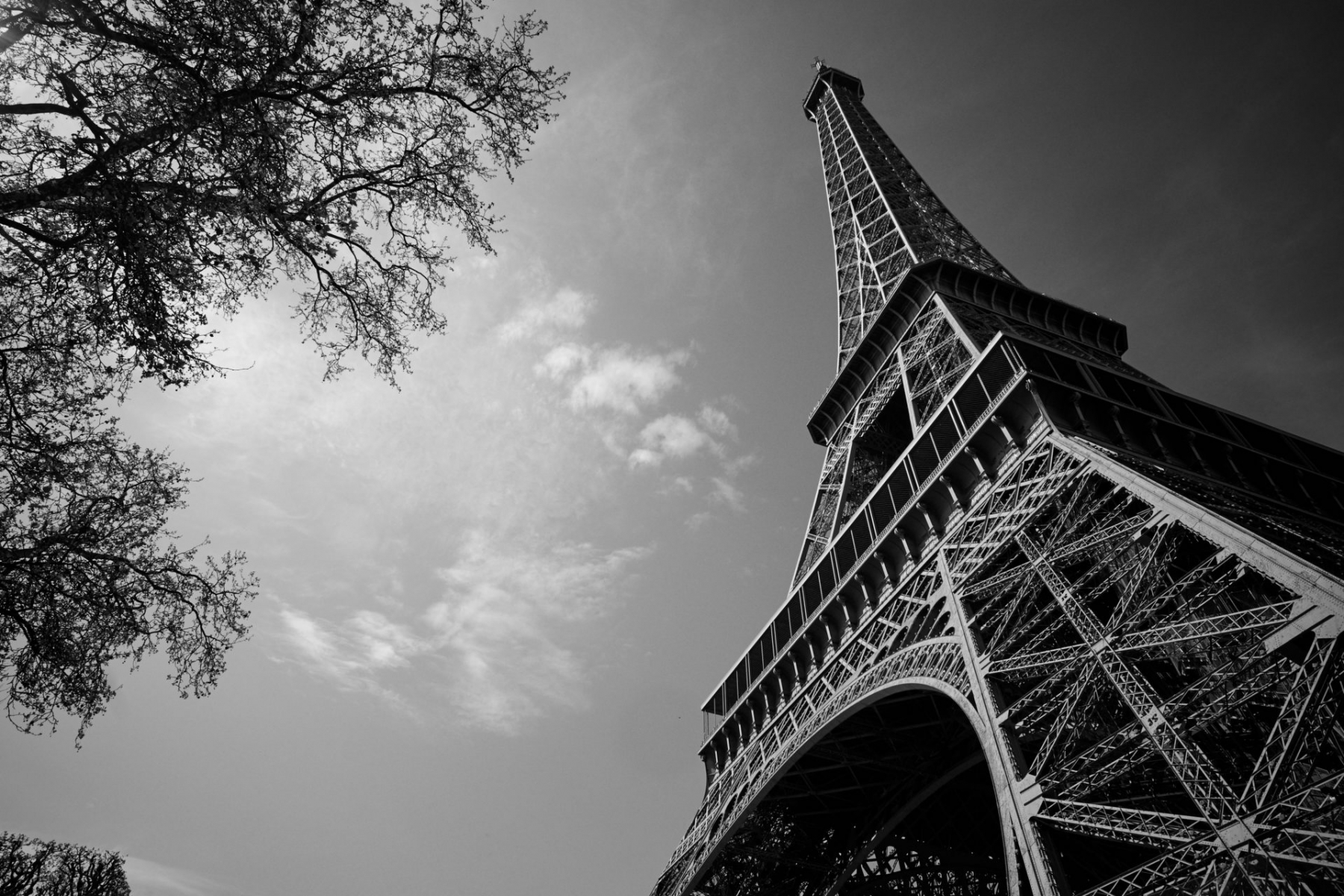 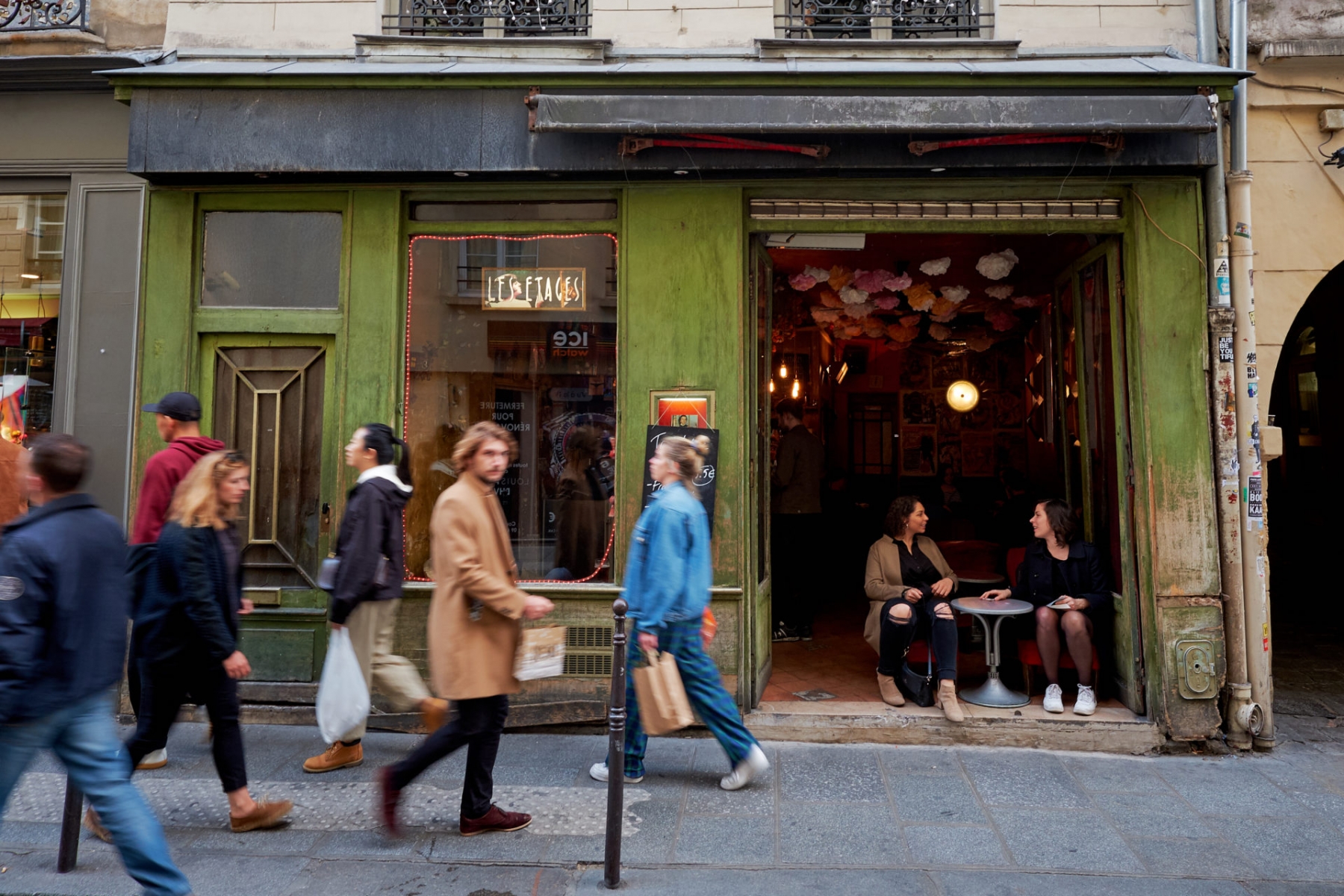 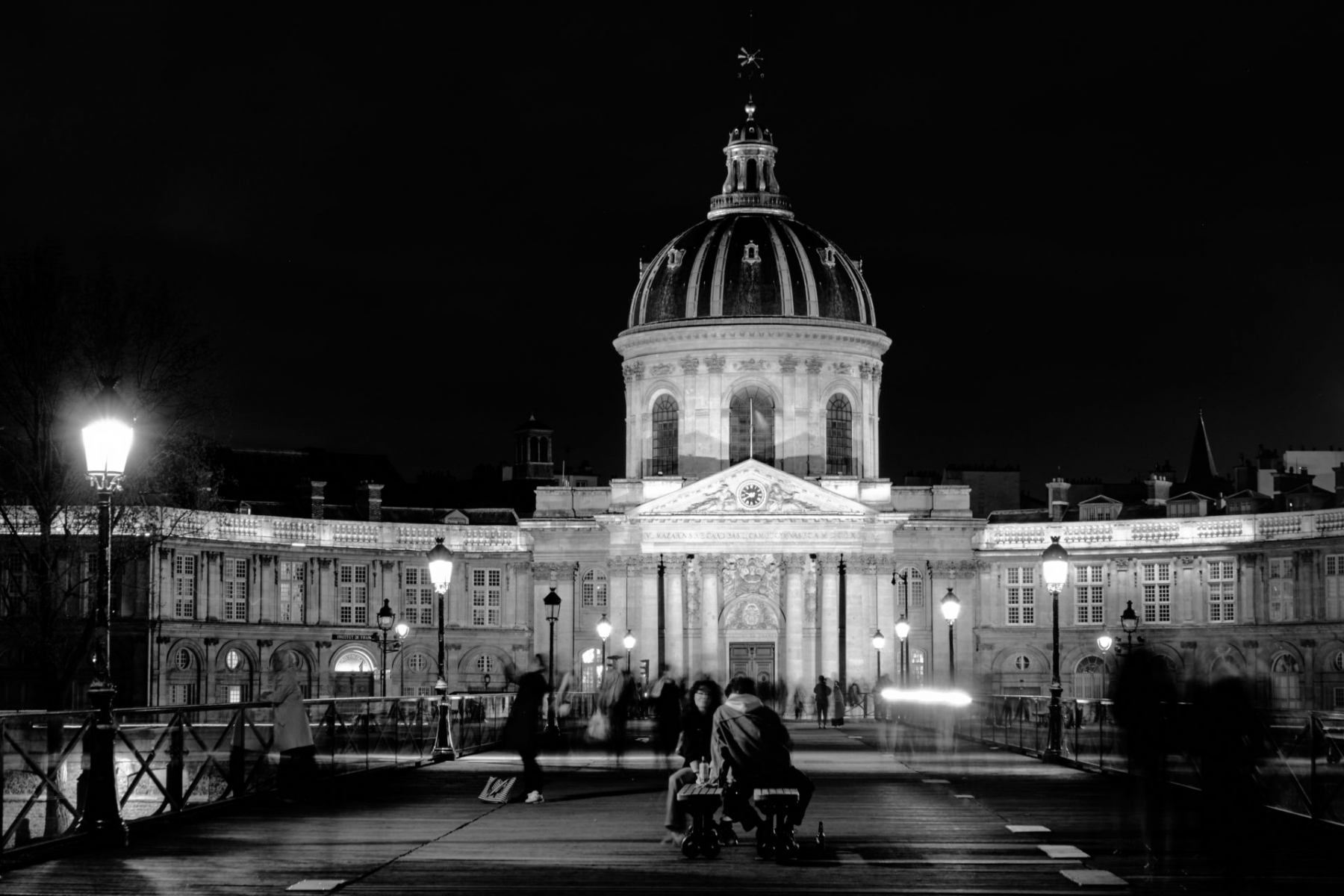 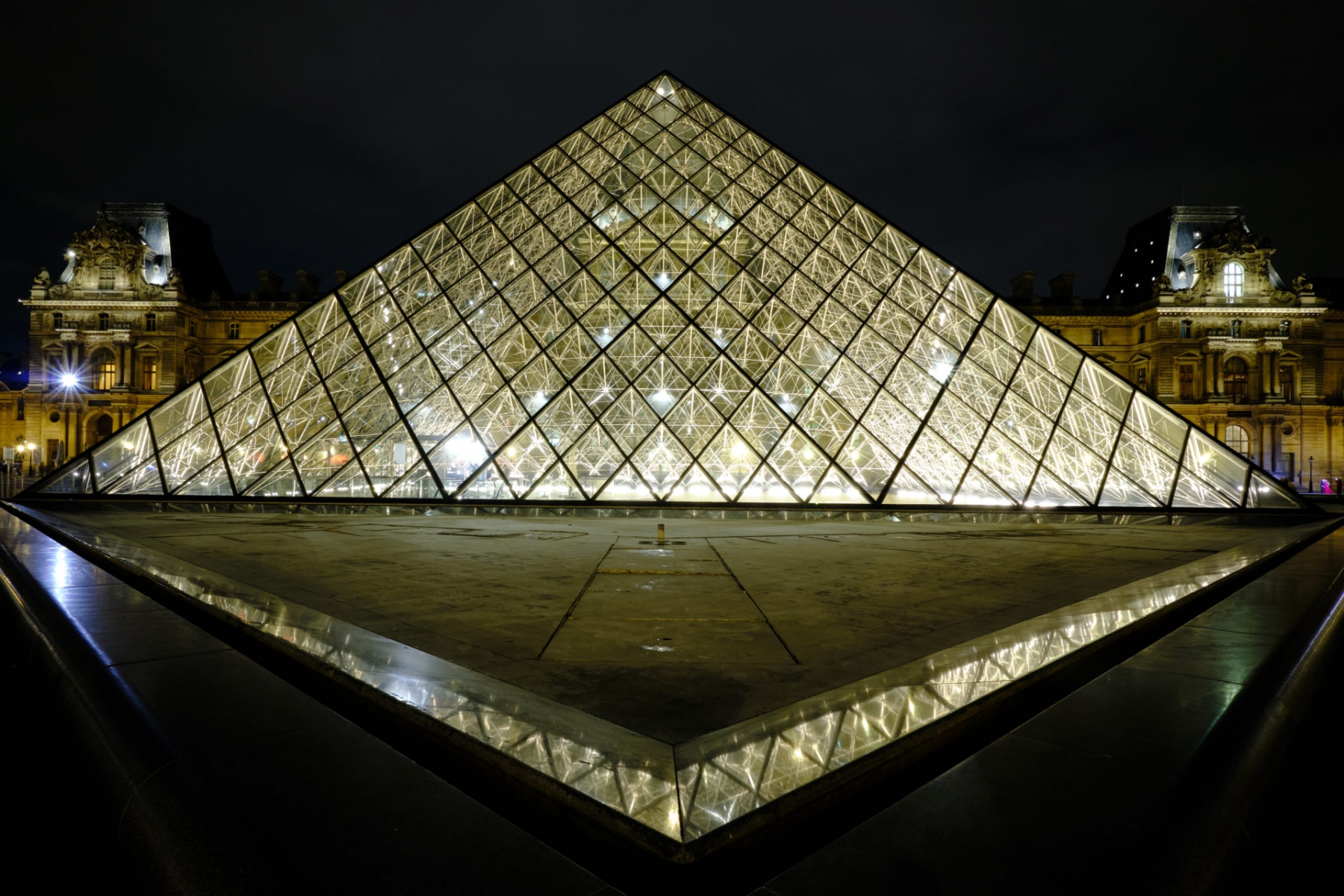 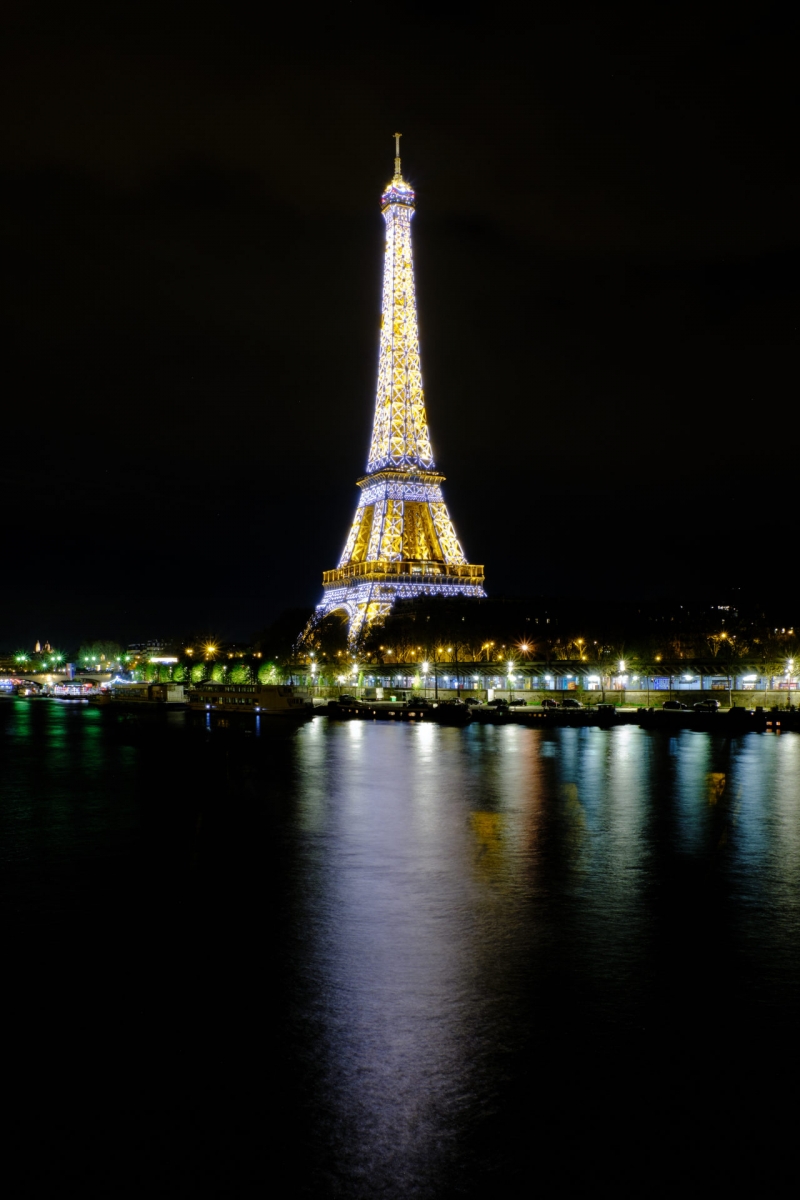 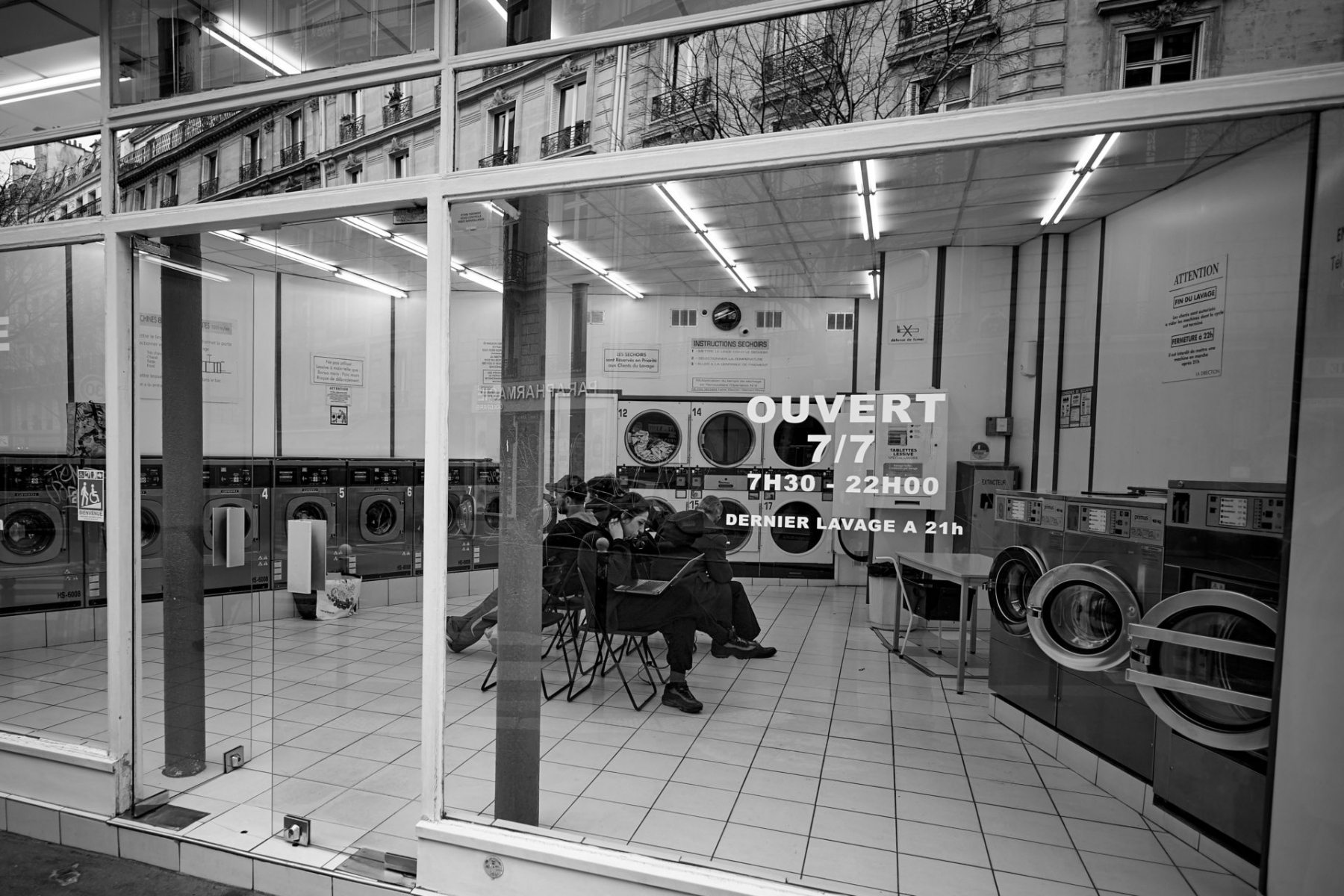 There are other shots, mainly cityscapes, in the gallery above, but, before that, I wanted to dedicate few words to what happened to Notre Dame de Paris.
We were there a week before the roof got on fire, with all the damages that this caused. We climbed the stairs to get to the panoramic roof, we could admire the interior of the cathedral, we saw the spire, surrounded by the scaffolding, we ate dinner in a restaurant nearby, looking at the cathedral from the window next to us… It was dreadful for us to watch the TV while the fire was quickly destroying most of the cathedral. It was dreadful, but we could not stop watching the TV. I kept hoping that, despite the fire, despite the spire collapsing on the roof, despite the fire in the tower…despite everything, I was hoping that the interior roof could resist, saving the interior of the cathedral. This did not happen, or not as I hoped for. The interior was severely damaged, although not 100% destroyed.
I did not take any special picture in Notre Dame de Paris, mostly tourist shots, but I’ll leave a dedicate gallery to he cathedral, as I think I owe this to the cathedral after what happened in April 2019. 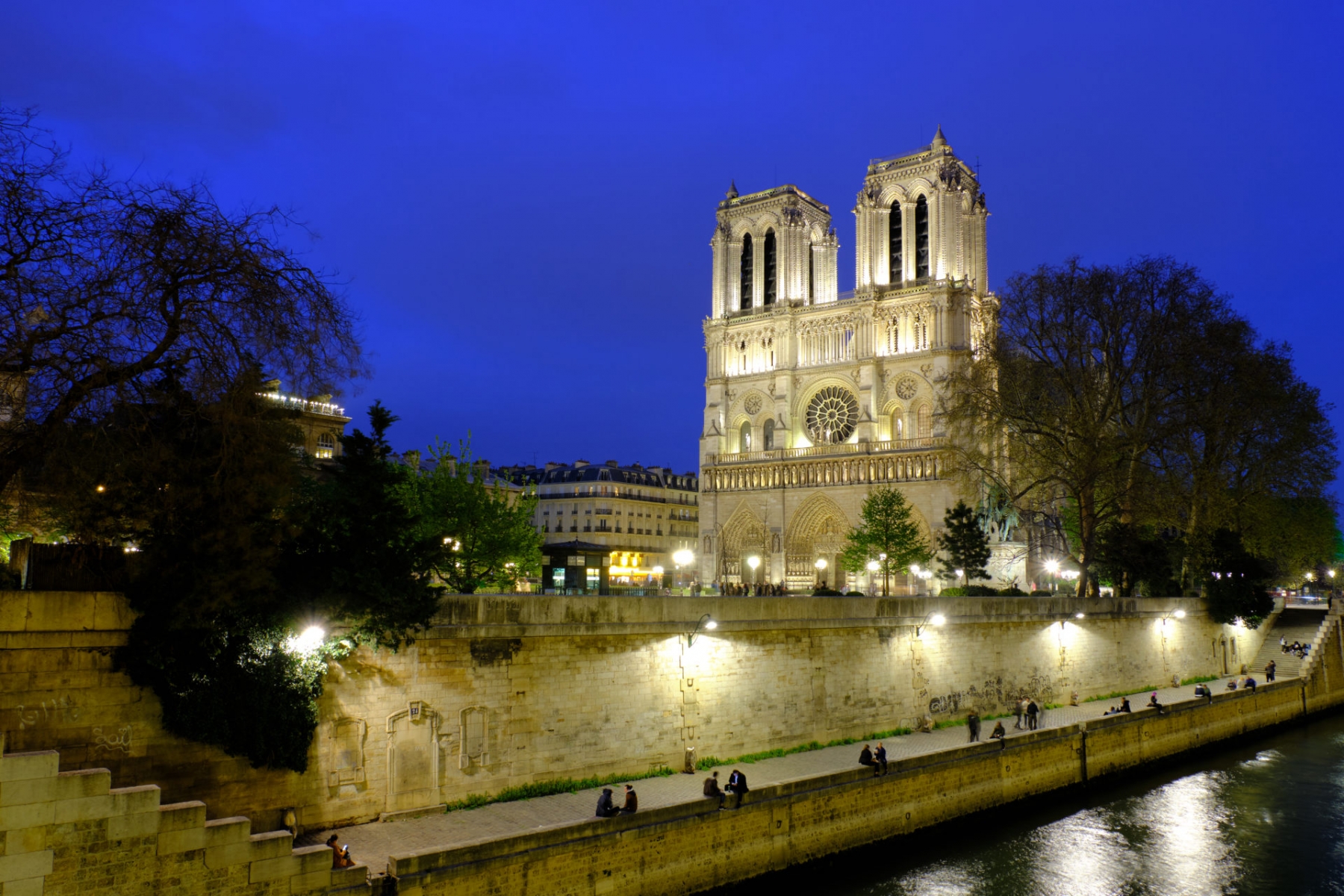 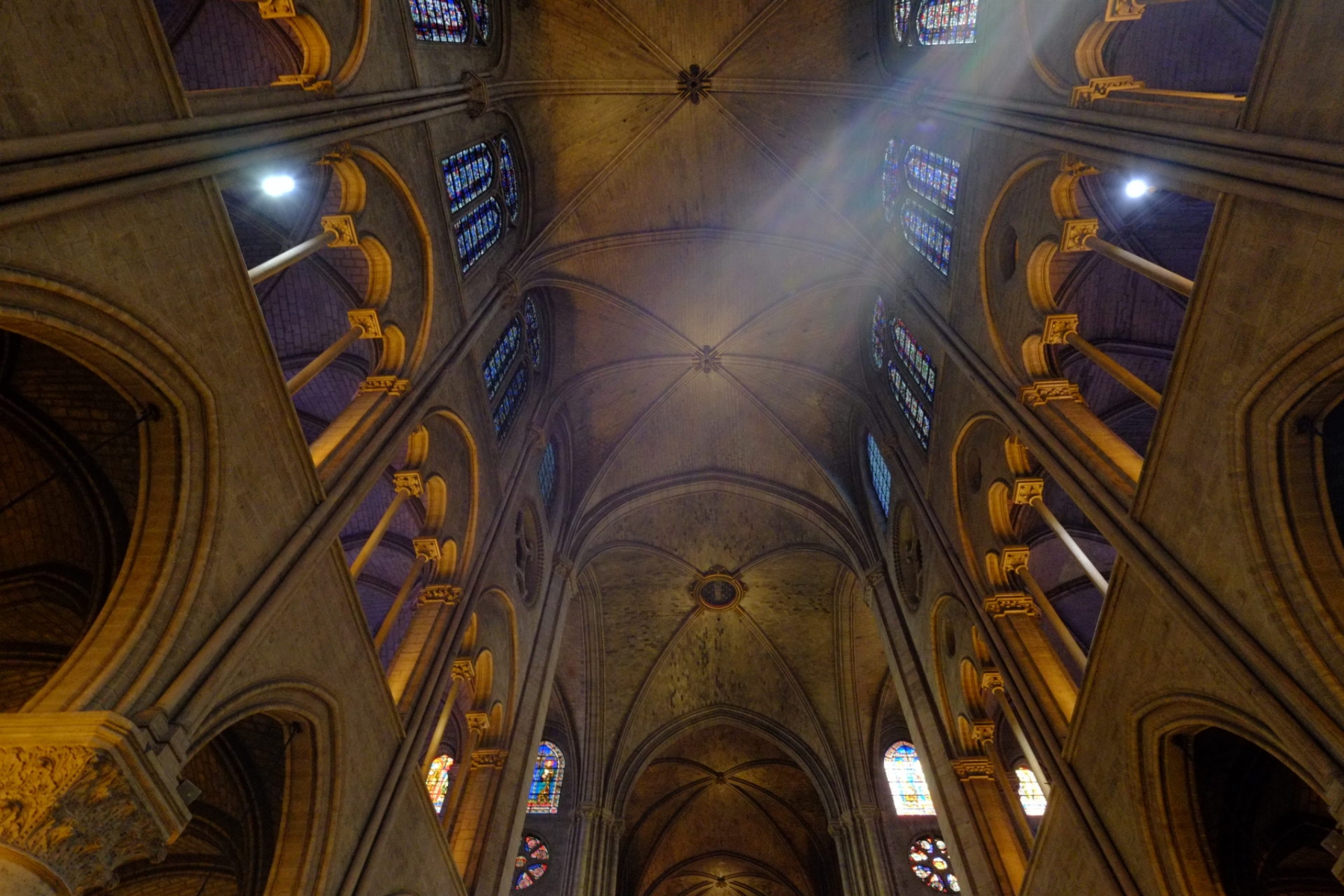 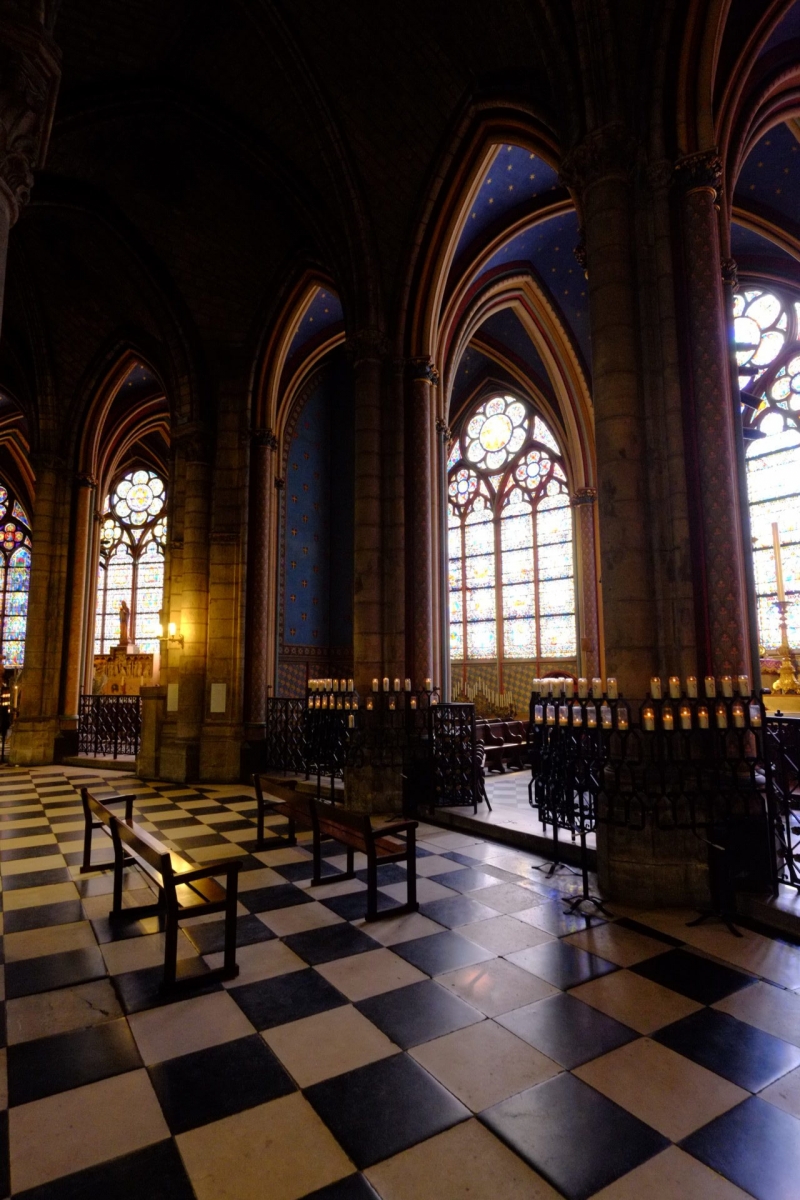 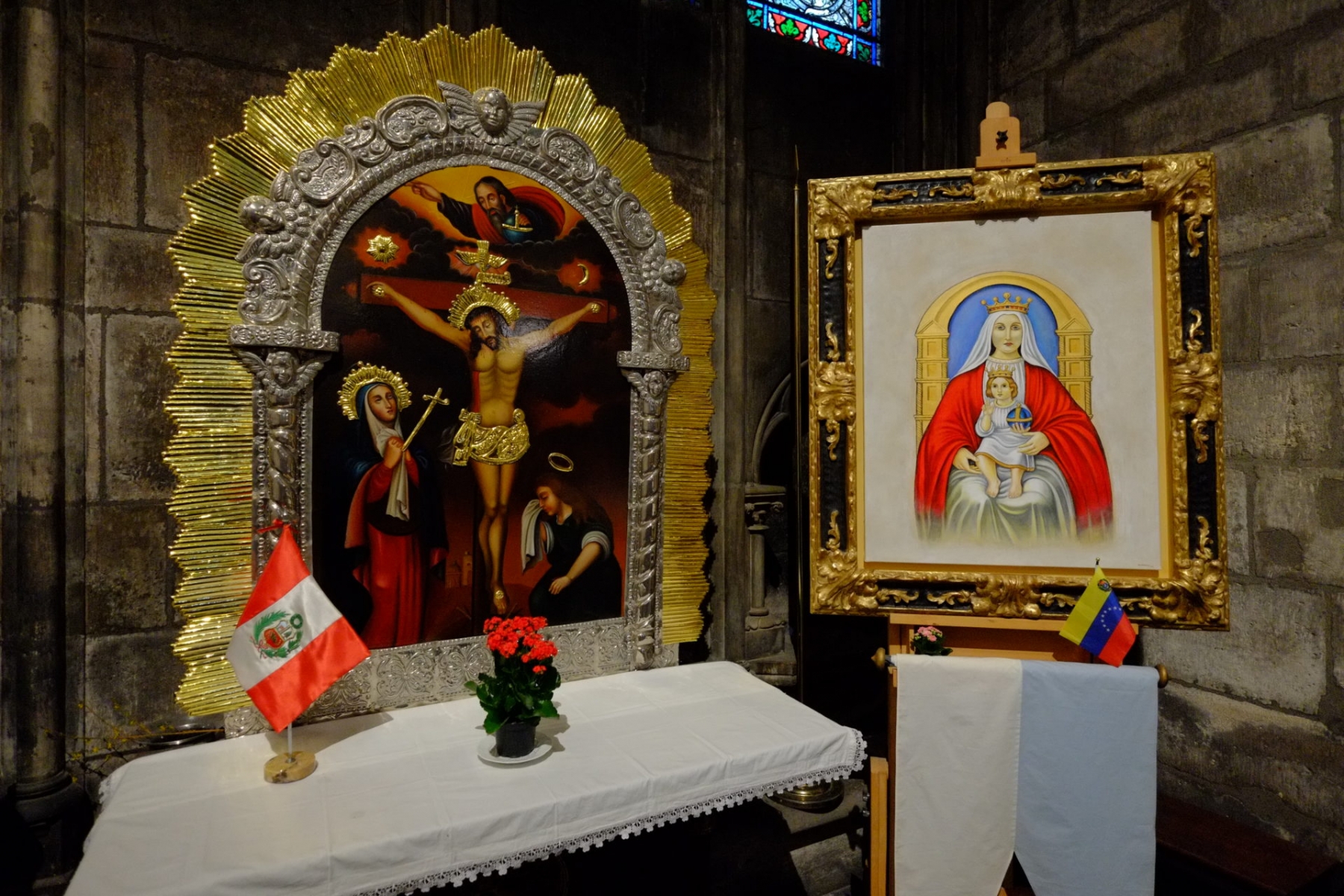 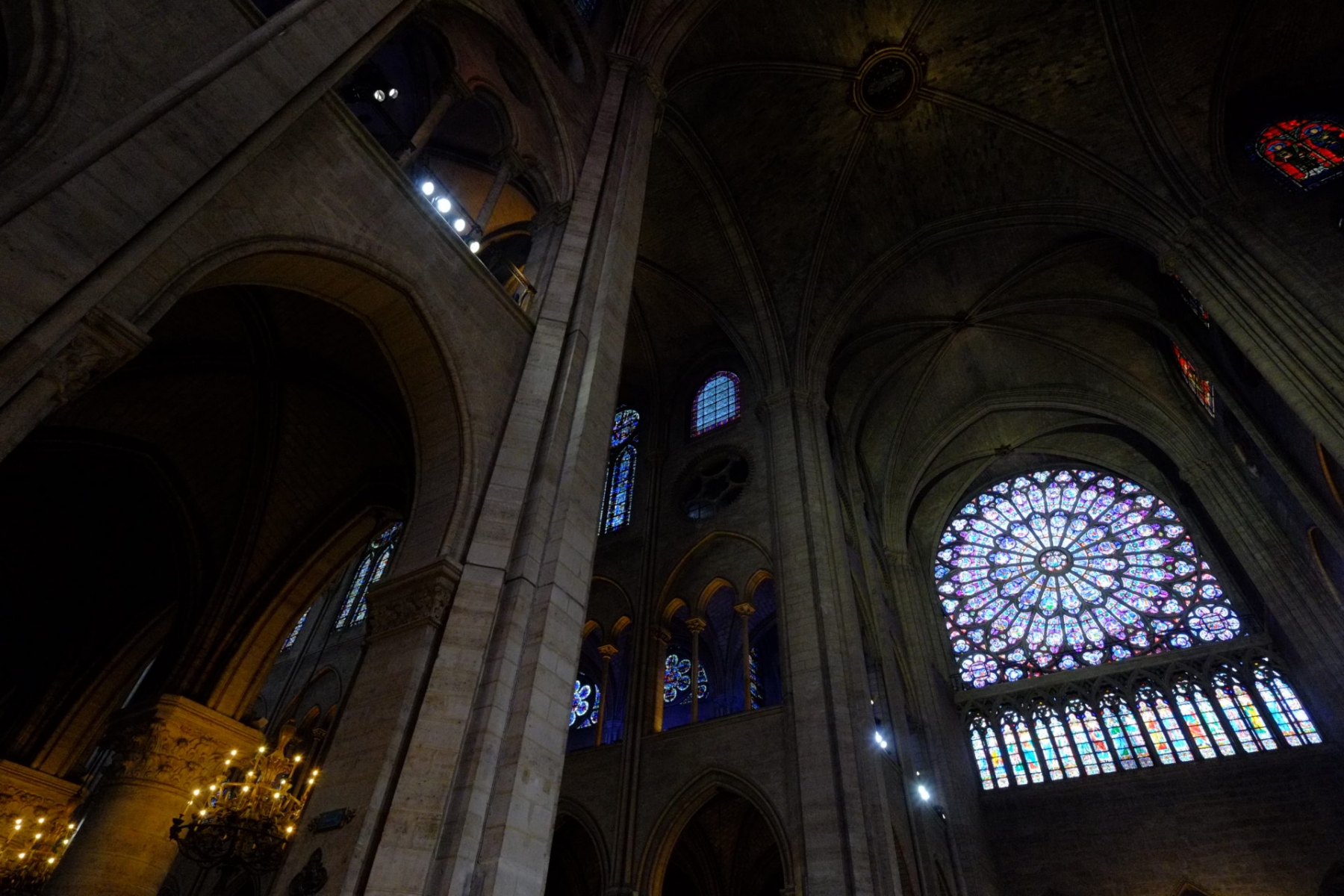 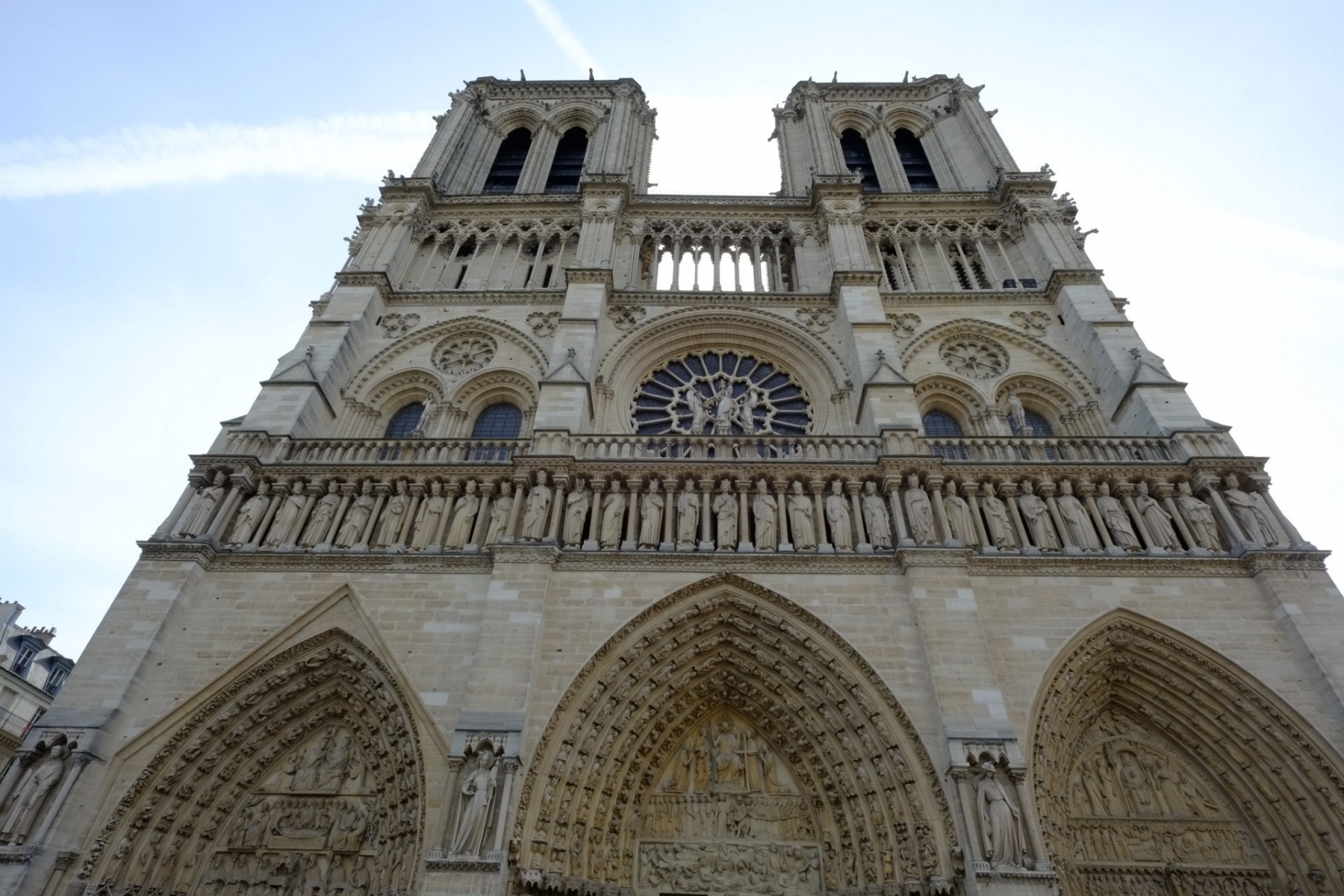